103.5 KTU's KTUphoria is back! Bringing the party to Jones Beach Theater on Saturday, June 18th, 2022, KTU has lined up a star-studded set of performers led by Pitbull, Ava Max, Regard, and Laidback Luke, along with a special 25th Anniversary Freestyle Set. Claimed as "a tradition to celebrate the start of summer", KTUphoria won't disappoint! Catch the world's hottest hitmaker 'Mr. Worldwide joined by the "Sweet but Psycho" and "Kings & Queens" singer Ava Max, with the international-sensation DJ, Regard, and Dutch-Filipino DJ, Laidback Luke. Tune in and catch the airwaves come alive as KTU throws a bash at KTUphoria with a star-studded lineup on the roster. Book your tickets now! 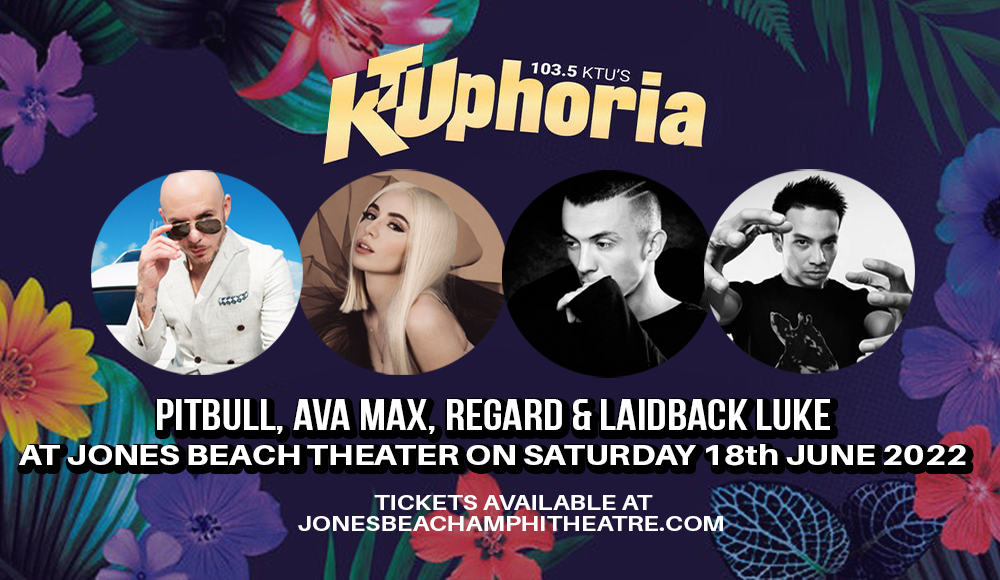 KTUphoria is starting off with a pre-party celebration led by KTU's resident DJs along with some very special artists. Open to ticket-holders, attendees have the chance to win meet and greet packages with KTUphoria performers.

Off to the main event, KTUphoria 2022 is headlined by Mr. Worldwide hitmaker behind "I Know You Want Me", "Give Me Everything", "Timber", and more, Pitbull! Joining the roster is the "Sweet but Psycho" queen singer Ava Max who also took the world by storm with other hits "Kings & Queens" and "So Am I". Leading the party to throw some sick beats are acclaimed DJs Regard and Laidback Luke.

Chris Conley, Program Director of KTU said “KTUphoria is a tradition to celebrate the start of summer and this year’s 25th Anniversary show will not disappoint… We’re excited to welcome all the artists and listeners to the party and kick off the summer at Jones Beach Theater.”

So, don't miss out on this summer's best dance party led by a star-studded roster of artists! Witness airwaves come to life at the stage at Jones Beach Theater where the sickest beats shake the crowd into a night to remember. Book your tickets now!